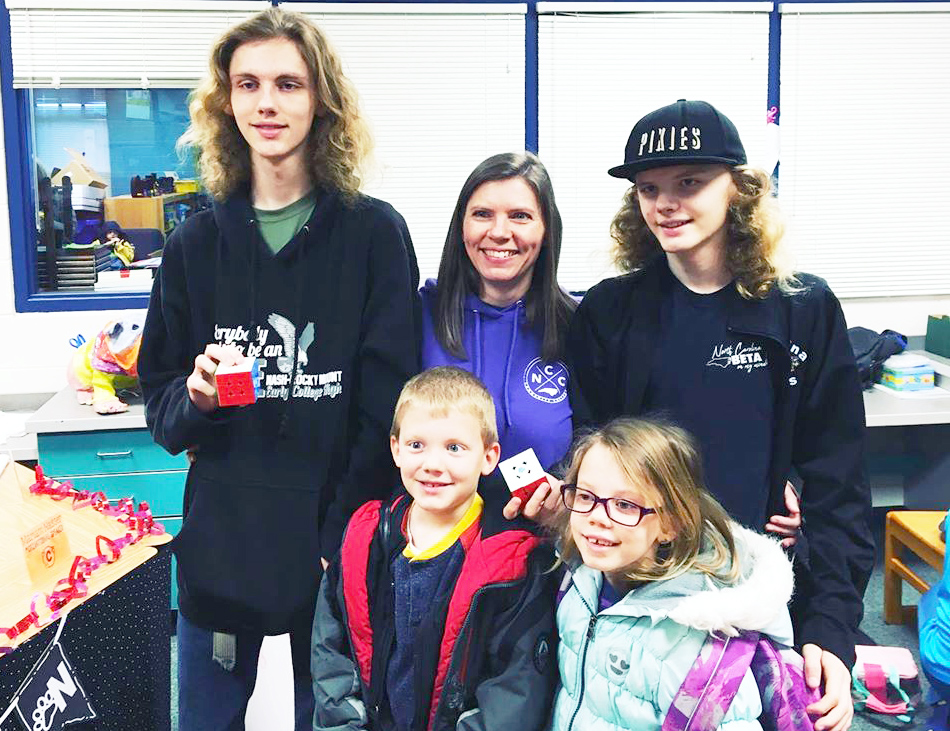 A Nash Community College instructor and her family are bringing a favorite 1980’s pastime back to the area. Information Technologies Instructor, Amy Vester, along with her children Baeden, age 16, and Lachlan, age 14, have re-introduced the Rubik’s Cube as a fun pastime for all ages.

“Lachlan first became interested in cubing last year as a result of boredom,” Vester said. “He was grounded from technology and picked up a dusty old Rubik’s Cube that had been in our home for many years.” Over the course of a few weeks, he learned to solve a standard 3×3 cube and it did not take long for his older brother to get involved. The two boys started learning various solving techniques and began timing each other. Their interest quickly grew to include other specialized puzzles such as 2×2, 4×4, and the Pyraminx, also known as the triangular Rubik’s Cube.

With their newfound hobby, the boys talked about how fun it would be to teach other kids how to solve the puzzles. They are both enrolled at the Nash-Rocky Mount Early College High School, which is located on Nash Community College’s campus. “Since the Early College has a later start time than traditional schools, they had the idea of starting a before-school Cubing Club at their former elementary school where their younger siblings are enrolled. Cooper’s Elementary School principal, Allison Williams, was eager to let them try it.”

The club began meeting last fall and has met on Thursdays nearly every week since. Club membership is open to fourth and fifth graders, and between 20 and 25 children participate each week. “Interest in cubing has grown among students in lower grades, too. Take a walk through the school during non-instructional times, and you are likely to see cubes everywhere,” Vester said.

But cubing isn’t just for fun, she explained. “It helps to improve memory and patience. It keeps their minds active and promotes critical thinking skills as they learn to solve problems and map out solutions. And, speedcubing is known to help improve dexterity and hand/eye coordination.”

According to Principal Williams, cubing has helped reduce discipline issues since it creatively occupies student attention as they concentrate on solving their cubes. Other Cooper’s Elementary Schools staff members have shared that cubing is helping their students with their conversation skills and has ignited a new excitement for learning. Students are gaining confidence, determination, and overall a more positive attitude toward learning.

Since last fall, dozens of Cooper’s Elementary School students, both club members and non-club members have gone from having no cube-solving skills to being able to fully solve a standard 3×3 cube. “The goal is to hold a small competition at the school before the school year ends,” Vester said. “We’ve started recording solving times for club members, and the times are already under one-minute. To see kids develop a skill like this while building community at the same time has been pretty amazing.”

In addition to having fun, Baeden and Lachlan see this as mentorship. Vester said she is proud of her sons for wanting to volunteer their time to share their interest with younger students. “This has given Baeden and Lachlan the opportunity to speak with the younger students about their educational goals,” Vester said. “Since club members are getting ready to head to middle school soon, they are starting to think about their futures. The elementary school children often ask the older boys questions about their experiences being on the college campus.”

“I primarily serve as moral support and cube-provider,” Vester laughs. However, she has admittedly been bitten by the cubing bug. Although she can not fully solve a cube just yet, she is able to help club members learn the first steps before handing them over to Baeden and Lachlan, the pros.