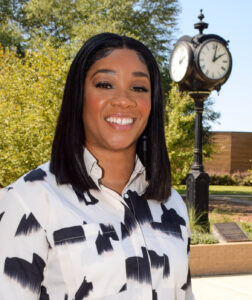 “Working hard and having a great attitude have paved the way for me,” Nash Community College student Shanette Graham said. “I have been blessed with opportunities that provided valuable lifelong skills. I have learned to grow through my successes, as well as my struggles.”

A native of Wilson, NC, Graham graduated from James Hunt High School. “I became a mother early – right after graduating in 2003,” she said. “At that very moment, I knew I had to make a way for us.”

After speaking with a military recruiter, Graham enlisted in the Navy. “The fear of flying and leaving home weighed heavy on my mind. I had never left my parents,” she recalls. “I entered boot camp at Great Lakes, Illinois, and had no idea what to expect. But I told myself, no matter what I had to work hard.”

During her eight-year enlistment, Shanette Graham held the rank of third class petty officer on the USS Theodore Roosevelt. She was deployed to Africa, Dubai and England on the nuclear-powered aircraft carrier with 5,000 other individuals. She served as a machinist mate servicing the carrier’s engines and other mechanical systems.

“I had the opportunity to learn and gain a better understanding of other countries and about the life of the military. While serving in the Navy, I became a brave, dependable, and disciplined leader,” she said.

Returning to civilian life in 2013, she enrolled at Barton College to pursue a degree in biology as a first-generation college student. “I was not sure what I wanted to do but I had an interest in studying the human body and mind.” She graduated with a Bachelor of Science degree in biology and a minor in psychology and began working at a pharmaceutical plant as a biologist.

“I have always had a strong will to learn. Learning excites me in so many ways. I love science and I am also good at math,” she said, which explains her current pursuit of an accounting diploma at Nash Community College.

“Someone told me about Nash, and I could hear the excitement in their voice when they spoke about the beautiful campus and the variety of programs offered. The excitement and love of learning is what led me to become a student here,” she said.
Now a mother of three, ages 8, 14 and 17, Shanette said, “I have made it my effort to show my children that anything is possible if you invest the time and energy into it. It is important for them to see me working hard, and to truly understand the importance of education. They need to know they can do the same.”
Graham is employed as a bulk mail clerk with the United States Postal Service where she continues her federal service. She hopes, upon completion of her diploma at NCC, to move up the ranks within the Postal Service.

“I don’t know...I just want to keep learning,” she said. “Since as far back as I can remember I have always loved dealing with numbers. Although math is not one of the favorite subjects for many students, it has always been my strongest subject. The advisors, counselors, and other students at Nash Community College provide a family atmosphere. They make it easy to communicate about classes, work, grades and planning for the future.”