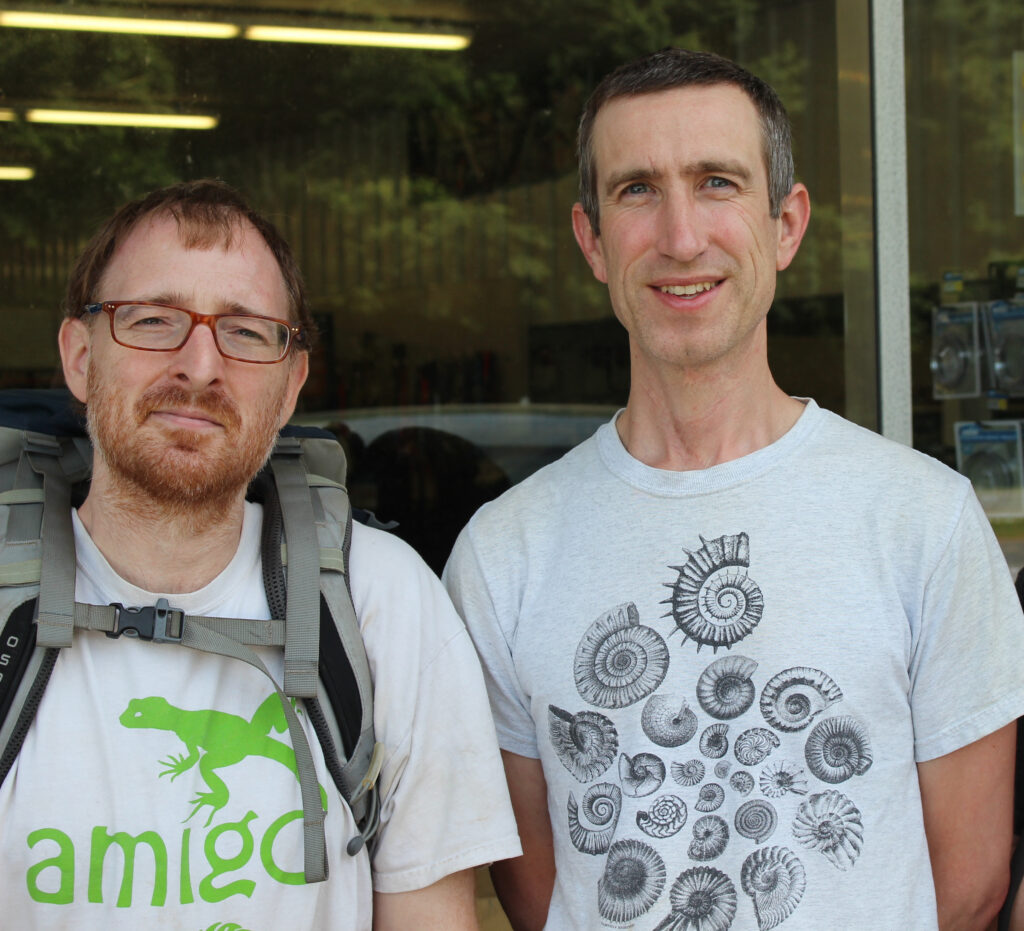 David Beamer, pictured left, with Paul Marek in 2016 during a day field research on the Blue Ridge Escarpment in Virginia.

As graduate students at East Carolina University, David Beamer, and his classmate Paul Marek, were inspired by the work of an amateur snail biologist named Leslie Hubricht.

“Hubricht traveled as a typewriter technician and collected snails along the way,” Beamer said. “In doing so, he not only discovered many species of snails, but he also uncovered new species of millipedes and salamanders.”

Beamer thought it would be cool to discover a new species of millipede in the coastal plain region – an understudied area. From working with Marek, he knew a little bit about millipedes and began to look for them while he was in the field collecting salamanders.

During a research trip in 2003, Beamer found a dead male millipede that was still in good shape. He put it on a leaf, packed it in mud and returned with it in a vial. “At the time, Paul Marek was working on his dissertation and was an expert in apherloriine millipedes so it made sense to give it to him,” Beamer said.

Beamer discovered the millipede near Barnwell, SC on the edge of a swamp in a small forest relatively far from areas regularly visited by biologists. “These types of millipedes are generally more common in the mountains and most of the sampling for them has occurred there leaving the coastal plain much more sparsely sampled,” he said.

“Paul wasn’t too excited at first, but as soon as the mud was washed away and he could get a good look at it, he thought it might be something new,” Beamer said. Realizing the potential significance of the finding, Marek and Beamer returned to the same area in 2004 and found two more samples of the same type of millipede.

Beamer had not entirely forgotten about the millipedes, but had moved on with his own research examining the species of dusky salamanders, collecting genomic data and teaching biology courses as a professor at Nash Community College.

In March 2021, Beamer received an email from Marek. The subject line read: Sigmoria beameri. Marek and fellow researchers had finally concluded the three millipedes were indeed a new species.

While he did not have a role in the research beyond finding the first millipede and handing it to someone who understood it, Beamer is proud to be part of the discovery. “Having a species named after you is definitely a bragging right for a biologist so that was a really exciting day,” he said.

The new millipede species, Sigmoria beameri, is described in a paper published in January 2021 titled “Phylogenetic Systematics of the Millipede Family Xystodesmidae.”

“It takes a while to conclusively establish a new species because the process involves extensive data collection, comparison and study,” Beamer said. “But, the millipedes we found in 2003 and 2004 are the only three individuals of this species known to science.”

Last year, Beamer was also among a team of scientists who contributed to the discovery of a new species of salamander in North Carolina. Beamer said he still collects millipedes during his fieldwork because he is interested in the similar environmental habitats between millipedes and salamanders.

David Beamer grew up in Cedar Lake, Indiana where he explored ecosystems, made observations and collected data as a young aspiring scientist. He studied at Indiana University earning a Bachelor of Science degree in Biology. Beamer earned a Master of Science degree in biology and a Doctor of Philosophy degree in Interdisciplinary Biology at East Carolina University. He serves as biology professor and lead researcher at Nash Community College in Rocky Mount, NC. Dr. Beamer lives in Spring Hope, NC with his wife, Denise, and their son.