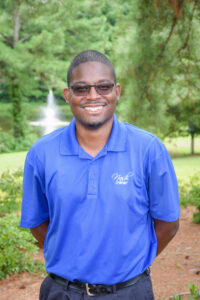 At NCC, Jamal Pitt has served as a math lab assistant, campus safety intern, director of MALE mentoring, and an e-learning specialist. In 2021, he began in his current role as a success coach.

Pitt demonstrates a deep understanding of the Open Door philosophy of the North Carolina Community College System supporting the specialized needs of NCC students and especially those from underserved populations. In his role, he is committed to serving the whole student and every student, often networking with campus and community partners to ensure students have the resources they need to be successful.

Pitt has represented the College at the state and national levels with his engagement in a variety of presentations sharing best practices from the College’s use of student retention tools and his experiences with the Minority Male Success Initiative.

Jamal Pitt exemplifies student-centered service and creates community through his unselfish devotion to providing opportunities for minority male students including university tours, interview preparation, community service and exposure to minority role models. During the pandemic, he has continued to be a strong student advocate and a voice of support providing innovative opportunities to create a space for students to articulate and process their experiences and emotions.

Jamal Pitt earned a Bachelor of Arts degree in Criminology from North Carolina State University and a Certificate in IT/Cybersecurity from NCC. He began working at NCC in 2015.

The Staff Award is an annual award recognizing the outstanding work ethic of a non-instructional employee at NCC. J. Edgar and Peggie T. Moore of Rocky Mount established the NCC Staff Award in 2004 acknowledging the achievement of the recipient. The Moores were longtime friends of the college also providing support for the Excellence in Teaching Award. In 1998, they established the NCC J. Edgar and Peggie T. Moore Faculty Senate Scholarship and later funded the Peggie Thigpen Moore Endowed Chair for Culinary Arts in 2009 honoring NCC Culinary faculty. The Peggie T. Moore Culinary Arts Wing in the College’s Business and Industry Center honors Mr. and Mrs. Moore’s legacy.