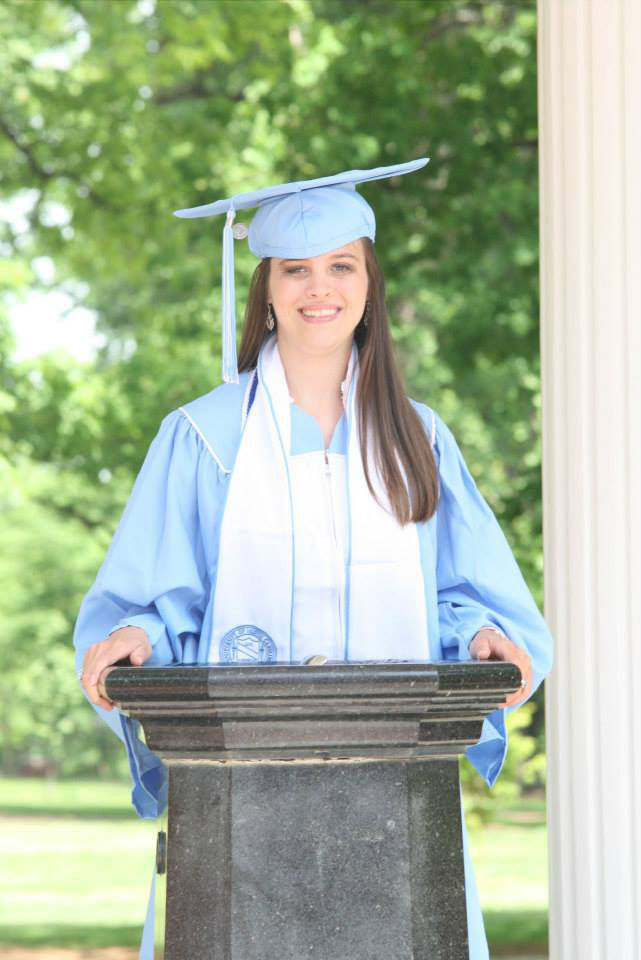 Jesse Sykes had her first experiences on Nash Community College’s campus as a Nash-Rocky Mount Early College High School freshman at the age of 14. At times, she balanced as many as five college classes in addition to her high school course load while facing health and life challenges. As a senior, her schedule held 34 credit hours plus high school classes in order to graduate as she had planned.

Jesse describes her time at Nash as a positive but challenging experience testing just how much she could handle. She learned to persevere through trials and difficulty and says she is a better person as a result of that knowledge. These lessons taught her to never give up despite obstacles in her path. “I learned that it is okay to ask for help; in fact, that is almost always a key to finding success.”

Jesse credits Nash as helping prepare her for the rigorous academic future ahead of her. Upon graduating as valedictorian from Nash, she transferred to the University of North Carolina at Chapel Hill (UNC-CH) in 2010. “At Nash, I learned how to write well, to think critically, to manage my time, and to study effectively. These skills were essential to my success at UNC-CH,” she said. “I would not be where I am today without the help of others, especially individuals at Nash Community College.”

Due to her experiences at Nash, Jesse explains, unlike some other students she knew, she never underestimated how difficult university life would be. She hit the ground running at UNC-CH and worked hard in order to succeed. As a result, her grade point average did not suffer, which gave her confidence to continue to excel throughout subsequent semesters. With a 3.69 cumulative grade point average, Jesse was inducted into Golden Key International Honour Society in fall 2011, the National Residence Hall Honorary in fall 2012 and the National Society of Leadership and Success in fall 2014.

At UNC-CH, she served as a research assistant for an Eating Disorders and Body Image Lab. She also completed an internship with the UNC School of Medicine Nicotine Dependence Program, which works to help people quit smoking. During her internship, she recalls, learning to be part of a professional group of colleagues, “I was always included and I never felt like simply an undergraduate student intern. I truly was a member of the team. I absolutely loved working with patients, and I got to see a portion of our patients’ stories and struggles. It was a humbling experience, and furthered my belief that I want to spend my career helping improve people’s lives in a healthcare setting.”

In December 2014, Jesse graduated from UNC-CH with distinction with a Bachelor of Arts degree in Psychology and a minor in History. She has been accepted into one graduate program and is waiting to hear back from her first choice. Jesse aspires to become a Rehabilitation Counselor helping individuals with physical, mental, and developmental disabilities to have functional lifestyles.

Her advice to current students: “School is difficult, and sometimes it does not seem possible to keep going. However, do not give up. I never thought I would be where I am now, yet here I am. Keep pushing and striving for greatness, because that will show you what you are capable of,” she encourages. “Do not try to do everything alone. Your educational adventure will be better and more memorable if you can look back and see the people who helped you and stood behind you.” She says what she remembers most from Nash is not bricks and mortar but the faces and memories of a support system who gave her a second home.