Award-Winning Engineer Brings Decades of Experience to the Classroom

Throughout his career, John Eubanks has seen a lot of changes in the field of engineering. Still today, he is passionate about sharing his experience.

Eubanks graduated from North Carolina State University with Bachelor of Science and Masters of Science degrees in Electrical Engineering in 1956 and 1962. “I always wanted to go to NC State,” he said. “My brother went to NC State following his service in World War II, and my dad and I would go to football games there. With my interest in electrical engineering, I knew NC State was for me.”

Upon college graduation, Eubanks began his career as a circuit design engineer at Bell Telephone Labs. He was employed at the labs in Greensboro for 10 years where he worked on the Nike Zeus project, an anti-ballistic missile system designed to destroy incoming ballistic missile heads. The technology performed even better than the team had initially anticipated. “It is pretty exciting to think I had a part in developing technology that would intercept foreign attacks on the U.S.,” Eubanks said.

During this work, he developed an Analog-to-Digital converter that was faster than any that had been developed at that time. Other companies wanted to buy copies of this converter from Bell Labs but Bell Labs was not able to do this. With permission from Bell Labs, in 1966 Eubanks and Robert C. Bedingfield started a new company named Computer Labs.  This company sold copies of the converter and related items.

For the past 25 years, Eubanks has taught math, electronics, and engineering at Nash Community College. In the fall 2004 semester, he was recognized with the outstanding teacher award by the NCC Student Government Association. Although he retired from teaching full-time, Eubanks currently serves as a part-time instructor in NCC’s Associate in Engineering program.

In 2015, he was inducted into the NC State University Electrical and Computer Engineering Hall of Fame for his professional achievement and entrepreneurial accomplishments.

In his Introduction to Engineering class, students learn the basics of robotics and engineering including possible careers, application and design. One of the highlights of the class, according to Eubanks, is teaching future engineers to build their own rolling robot with programmable features, customizable circuitry and sensors for autonomous navigation. “I love this college. It is a wonderful place to work. It is a paradise. Everyone gets along, and the students are prepared for lifelong success,” he said.

Eubanks, 86, has three adult children. He lives in Rocky Mount and has six grandchildren all of whom are college graduates. “I am so proud of them,” he said. In his free time, he enjoys writing computer programs and spending time with family and friends.

Since NCC’s Associate in Engineering program began in 2017, 28 students have graduated including two students enrolled as Goodnight Scholars at NC State University. The Associate in Engineering program prepares students for electrical, civil, biomedical, and mechanical engineering careers, and is also a great option for those interested in majoring in Physics or Mathematics. The degree program is one of the most rigorous degrees that NCC offers, however graduates may expect a starting salary of approximately $60,000 annually with a four-year degree. 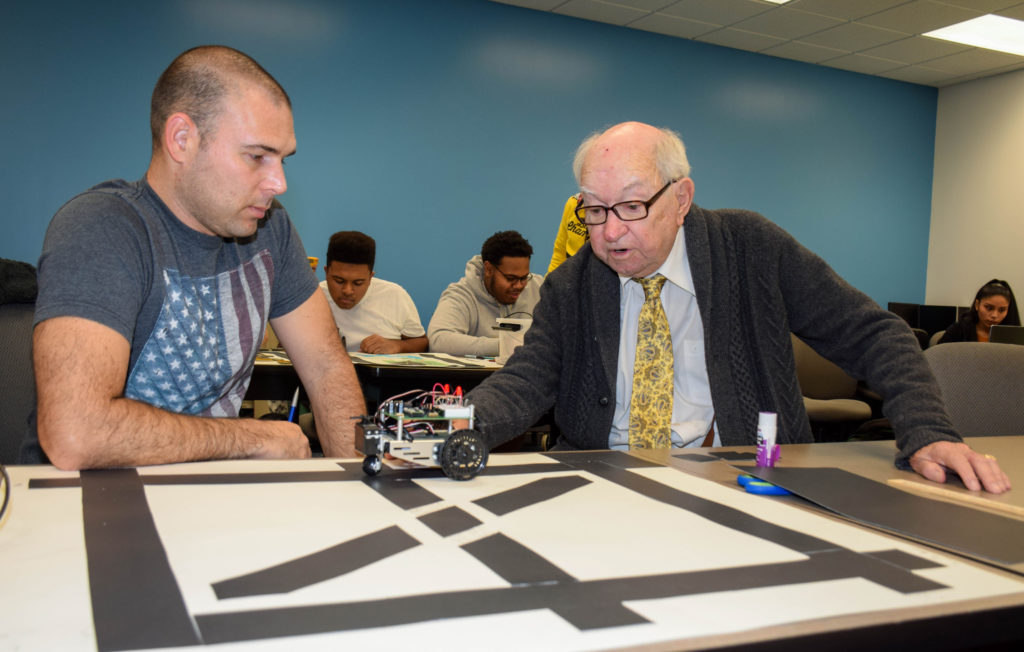