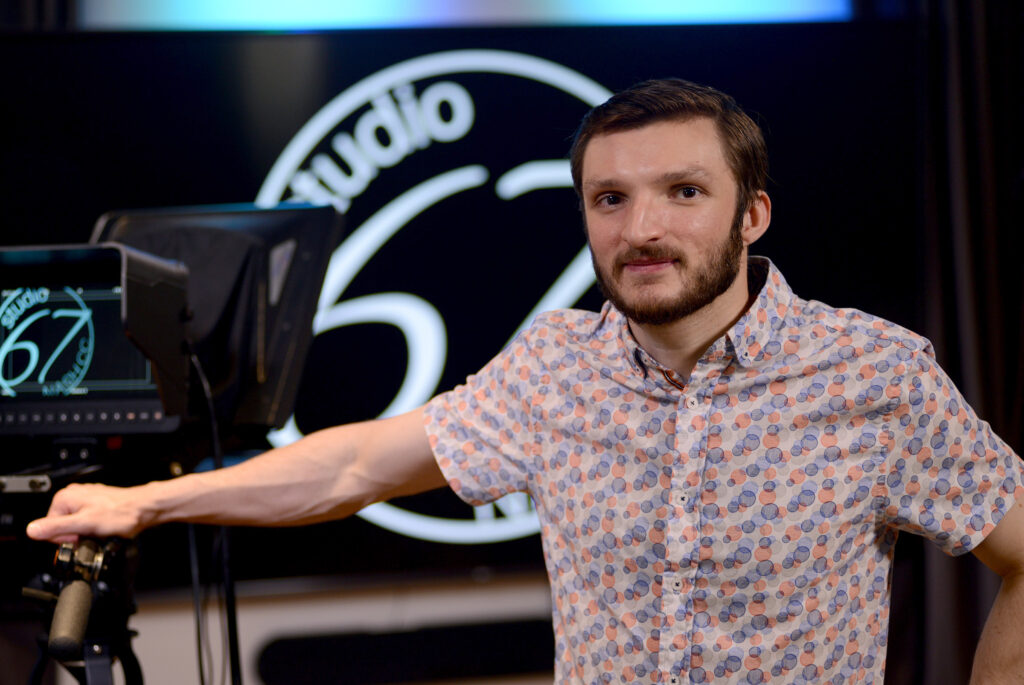 When Nash Community College Broadcasting and Production Technologies student Isaac Anderson entered the Broadcast Education Association (BEA) Festival of Media Arts competition in the two-year colleges category he knew the competition would be fierce.
“I was actually very nervous,” said Anderson. “There are some great schools in that category. I didn’t know we would actually win.”
In June 2020, Anderson and Studio 67 (Nash Community College’s multimedia studio, classroom, and laboratory) worked with Raleigh musical group Thirsty Curses to film and produce a music video for their song “Bruises on Your Shoulders.” The music video was filmed in Wilson, NC at the Edna Boykin Cultural Center following CDC-recommended Covid-19 protocol during filming.
Anderson said the Boykin Center was amazing and that everyone agreed to practice safety guidelines. “We were strict on having guidelines in place because we wanted to create this,” said Anderson. “We must have done 20 or 30 practice runs. Running around with a camera while masked wasn’t as easy as I thought it would be.”
Anderson served as director of photography, editor, and producer on the project and entered the final music video in the narrative video category for two-year colleges. He learned he won the category competition early in March and that his entry would be entered into the Best of Festival competition.
“It caught me off guard. I was coming into the office when I learned I had won. It was definitely a surprise, but a welcome one. I told the band and they were excited about the win, too,” said Anderson.
The BEA Festival of Media Arts is an international exhibition of award-winning faculty and student works and is the top competition for the Broadcast Education Association. BEA is the premier international academic media organization. NCC has been a member of BEA since 2019.
On March 29 Anderson attended a virtual awards ceremony usually held in person in Las Vegas, NV. Fifty minutes into the ceremony the 2-Year Colleges category was announced, and Anderson found out he had won “Best in Festival.” He even was allowed to unmute and say a few words to attendees.
“It was great enough to make a work of art with some cool people, a great song, and a strong vision. It’s even cooler that it’s being recognized internationally. I’m thankful to have worked with an awesome band, who I can call my personal friends, the awesome team at Studio 67, and I’m happy everyone has been enjoying the video,” said Anderson.
Best of Festival winners receive recognition, a cash prize and exhibition of their works during BEA’s annual convention, held yearly in Las Vegas.
The music video for “Bruises on Your Shoulders” by the Thirsty Curses is on YouTube and has been viewed over 11,000 times.