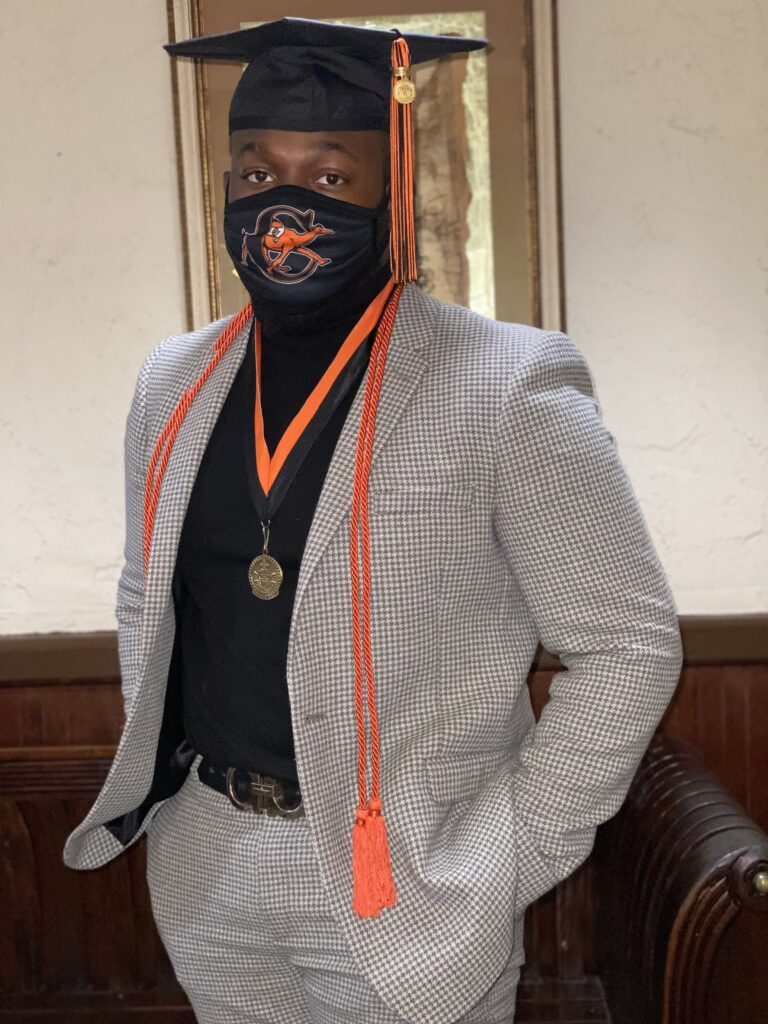 Kenard Johnson says his experience at Nash Community College provided the tools for him to be successful not only academically, but also in his day-to-day life.

Johnson graduated from Rocky Mount High School. He attended NCC from 2015 until 2018 before transferring to Campbell University.

“I decided to go to NCC because I wanted to be productive and it was close to home and affordable,” Johnson said. “I didn’t have the best habits initially to be academically successful, it wasn’t difficult for me to develop them at NCC. I started to mature and practice better study habits due to various instructors, leaders in church, and family urging me to push harder and work towards excellence to be a positive example for my hometown.”

Johnson graduated from Campbell University, with honors, on Saturday, May 8, 2021.

“Where I come from, there isn’t really a culture of pursuing higher education, let alone finishing high school. At Nash, they made me feel like I was created to do great things… things larger than I can even fathom.”

“At NCC, students are assisted in every way possible,” he said. “It isn’t just students working to attain their goals, but there is a team, no…a family… there to assist if there is any trouble along the way.”

Johnson transferred to Campbell University and adjusted quickly to life on his new campus. “I expected to be settled in after about a month but it only took about two weeks. They have a really good orientation team who did a great job explaining to the newcomers how to navigate the campus.”

With classes and extracurricular activities filling his schedule, Johnson said time management was his biggest challenge. However, once he established a routine and stuck to it, he was able to perform at the highest level.

Johnson played football at Campbell University for one year and later became a videographer on the football film team. He also served as a resident chaplain. “I put everything to use that I had been learning. I had ample opportunities to exude the resilience I developed in Rocky Mount,” he said.

Kenard Johnson was president of Campbell’s Christian ministry, Radical Athlete and Student Oasis Ministry (RANSOM), and was a member of the Student Executive Leadership Council representing RANSOM on seven other college campuses. “Being a leader left me no choice but to chase excellence. I learned that my success isn’t really for me, but for others to see modeled along with my failures.”

“I developed relationships that will last a lifetime. I have been mentored by professors and had mentorship in the faith. From my involvement with football, I also gained skills and perspectives that allow me to see life from a different lens. And I met brothers from other mothers,” he said. “Our relationships were forged from stern accountability from our foundation of faith.”

Johnson earned an Associate in Arts degree from Nash Community College and a Bachelor in Fine Arts with a minor in Graphic Design at Campbell University. This fall he will begin working toward his master’s degree at Savannah College of Art and Design.

NCC President Honored with Order of the Long Leaf Pine